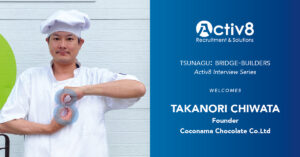 Takanori Chiwata founded the chocolate shop “COCONAMA CHOCOLATE” in Vancouver, Canada. Since its inception 10 years ago, Chiwata has successfully led the local shop to new levels of popularity, creating many “TSUNAGU” stories in the process.

His initial inspiration for the business came during college, when he was in national track and field competitions and wanted to support his fellow athletes with food. In graduate school at Kyushu University, he studied food science and later joined Meiji Co., Ltd., one of Japan’s leading confection makers, to develop sport foods. Shortly after, he was assigned to the product development department that specialized in chocolate – a moment he calls his “fateful encounter” with chocolate.

I wanted to connect with customers closer.

At Meiji, Chiwata handled product development and product manufacturing management at factories and research institutes. “It was a rewarding job because I was blessed with friends,” he said. “But since it is a major corporation, I felt that the customers who actually eat the chocolate were at a distance and I wondered if my work really helps someone,” he said. After 10 years, Chiwata left Meiji in June of 2010, because he was strongly motivated to do work that  allowed him to feel the customers’ satisfaction directly, instead of just delivering products. He worked at a confectionery store that he knew for three months and moved to Canada in September shortly after. There, he started selling his own chocolate at a Japanese supermarket in Vancouver during Christmas of that same year.

Even after distributing his chocolates to the Japanese grocery store, he still wanted to see the customers’ faces and participated as a vendor in the local farmers’ markets. Before the COVID-19 pandemic, Chiwata sold product at 10 farmers’ markets per week. Even now, he goes to farmers’ markets a few times a week by himself. “At the farmers market, it’s really fun to be able to directly feel the reaction of the customers – I feel like I’m alive,” he said.

Chiwata says that customers enjoy the colorfulness of his company’s nama (or truffle) chocolate. He says they often ask, “Is this really chocolate?”, and that some customers would say, “I have never seen such chocolate” and return to the store to give their feedback. These moments made Chiwata feel that he was achieving his goal of connecting with customers. “This was exactly what I was looking for,” he said. The community connection has also positively impacted his business in an unexpected way. Chiwata’s new home of Canada is filled with people with diverse ethnic backgrounds and he has happily taken on the rewarding challenge of making products according to their tastes.

Meanwhile, the famous organic supermarket “Whole Foods Market” was going to carry out a campaign to sell local products in its nearby locations, and Chiwata participated in a competition with his fellow vendors. He won the competition and spurred sales at the supermarket as a result. “The fact that our products were sold by Whole Foods made customers have a better sense of security with our products and started trust us more,” Chiwata said.

For the first four to five years, his business mainly sold nama chocolate (truffles), but afterwards he travelled to Belize and Guatemala where cacao are produced. This helped Chiwata gain appreciation for cacao producers, who take the time to cultivate them. Through this connection, he felt that he wanted to take his company to the next level where he can gain his customers’ appreciation.

Thoughts in the catch phrase “Connect People with Chocolate”

The catch phrase for “COCONAMA CHOCOLATE” comes from “Connect People with Chocolate.” Most of the cacao are grown in poor countries, and the local people perform all the processes from harvesting and drying to fermentation by hand. After these steps, chocolate is brought to consumers and is ready to be eaten – which is why Chiwata says we should remember the business’s guiding principle: connecting people. “Chocolate is not only eaten and consumed by oneself but is often used as a gift and is an important means of communication,” Chiwata said. “The company’s logo is designed with cacao beans. If you look closely, it is made up of many shapes of people.”

Takeaways from the setbacks

When he was a college athlete, Chiwata hit his personal limit. He realized that there are higher levels of athletes that he could not complete with and decided to seek something else that will encourage him and keep growing. He then worked very hard to go to a graduate school. “We can keep going because of mistakes and failures. If you don’t work hard, tomorrow’s yourself will be upset with you,” he said.

Now, Chiwata tirelessly works to use his business and culinary passion to build better relationships between people and for future generations of citizens. “My goal is to complete the work of ‘Connect People with Chocolate,’” he said. “And I also want to develop chocolate for the next generations.”

As for advice, Chiwata says that people aiming for a new career should cherish and take advantage of their most valuable resource: time. “Take care of your time! Only time is given to everyone equally, and if you use it effectively, it makes a big difference,” he said. “No one teaches you anything when you grow up and go out into society. Invest in yourself and keep learning to make up for what you don’t have. Nothing is scarier than to stop growing,” Chiwata said.