Masa Sasaki is an Atlanta-based ceramic artist whose work features bright colors and fanciful details. His whimsical yet functional ceramics have been exhibited in museums and galleries in the United States. In recent years, his work has found popularity on Instagram (@masasasakiceramics), sparking an influx of orders from customers around the world. Here is the ever-busy Sasaki’s life story, in all the flow of its connections. 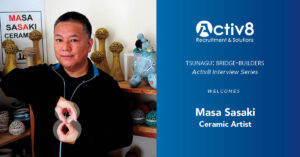 Sasaki first came to America in high school while participating in a year-long exchange program at Buhl High School in Idaho. This short-term foreign exchange experience was his introduction to the United States. Living in a foreign country in a city of 3,500 people in the late 80s was a culture shock to say the least.

In the late 1980s, Sasaki first came to the United States, as a yearlong exchange student visiting Buhl, Idaho. Making the leap into Buhl High School and a town of 3,500 people was a bewildering, yet also enchanting, experience.

“Of the four people who also were in the exchange program, two of them were unable to overcome the challenge and returned to Japan right away. However, I had already fallen in love with the U.S. and felt that it was just right for my personality. American schools place a bigger emphasis on individuality, unlike Japan, and I found that to be very comforting,” said Sasaki.

Once in love with his new country, Sasaki dug deep to find a way to stay. Upon graduating from high school, he started community college in Idaho with his parents’ blessing.

Life in America and my family’s support

Sasaki’s family was very supportive of their son’s decision to make a life abroad.  His parents believed in the saying: a pampered child learns little, and it is best to send them out into the world.

In fact, Sasaki’s move to the United States likely inspired his father, a country music singer who performed under the name Hank Sasaki, to follow him. “My father saw me taking part in an exchange program and said, ‘I’m going to follow my dreams and go to the home of country music,’ and went all the way to Nashville.”

To be closer to his father, who was starting his second life in the home of country music, Sasaki continued on to Western Kentucky University, about two hours away from Nashville, and began studying graphic design.

The reason he started his career as a ceramic artist

Sasaki stumbled into ceramics by pure luck, and it took a while for him to realize his true vocation. “By chance, a ceramics class that I took was interesting, and I was completely taken by the feeling of transferring two dimensional art onto a three dimensional canvas. However, my major was still graphic design, so I didn’t really think about advancing into the field of ceramic art.”

After college, Sasaki moved to Atlanta, GA. Since his life revolved around a different job, the days without art felt empty to him. He started going to a ceramics class, and once again became engrossed. He began selling pieces of his work at local art festivals. Slowly, his fan base increased, and, eventually, he caught the eye of a local gallery. 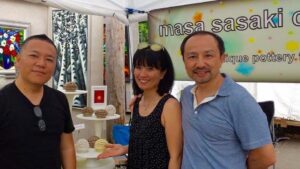 “After having my pieces put up in galleries they started to sell very well. Starting with the Kentucky Art Museum (KMAC), and moving on to the Atlanta state “High Museum,” and many other galleries reached out to me and now my pieces are placed there,” Sasaki said. From his days selling pieces at local art festivals, he had created a large network of people who helped him grow his business. By the time museums discovered him, he could make his living from his ceramic art alone. 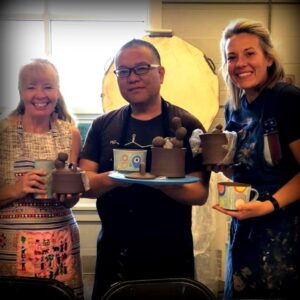 The gifts that ceramics gave to me

In Atlanta, the first thing Sasaki did was connect with the locals. “Having conversations with customers at the local art fest and receiving feedback, I really enjoyed that feeling of connecting to people. From the relationships I made at the art fest, making plates for local high end restaurants or making flower pots for the local gardening store, collaborating with the local people is also fun,” said Sasaki. In addition, by holding ceramics workshops, gallery events and teaching college students, Sasaki is teaching others about his love for ceramics. 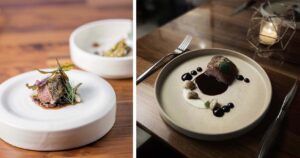 The emphasis on “stories” in his artwork

The fresh, colorful, fun images in Sasaki’s artwork arise from his earlier study of graphic design. “The step that takes the longest when creating a piece is the painting and glazing. This step is kind of like putting clothes on the ceramics. It is not just drawing something on the ceramics, instead I believe it is important to add a story within the artwork.” 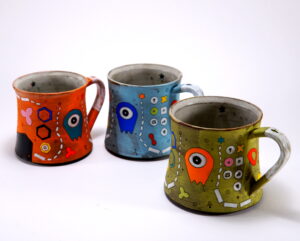 (Photo): This popular mug uses a colorful, fun alien as a motif. At the bottom of the cup lies a human, abducted by the alien. The idea is, if you drink coffee in the morning, you can save someone from an alien!  Sasaki’s works constantly encourage this playful attitude toward art.

“To be honest, I’ve never had anything I can call a frustrating experience in my life. I’ve always been someone who doesn’t really get upset. However, when I first came to America and crashed into the language barrier, I regretted not studying English more. To make up for my deficiency in English, I drew and played piano and was seen as a sort of a popular guy. Thanks to my friends and the people who were there for me during my struggles, I was able to find where I belonged.”

As for the future, Sasaki wants to try sculpting and object making, ideally in the new backyard studio he is planning. He also wants to build more connections and show more of his pieces in his homeland, Japan.

“Don’t think too much. If there is something you enjoy, keep doing it without giving up. Wait for a chance to come by and then turn it into something real. Even if others tell you that it is impossible, don’t believe them. For me, too, that is how I got to where I am now,” Sasaki said.

His decisions at age 18 helped turn his father’s dreams into reality, and his determination also helped him gain the motivation to turn ceramics into his full time career, Sasaki reflects.

“The most important thing is to be excited. For me, ceramics was not really a job, but something that made me excited, and that is why I can’t stop doing it.”