TSUNAGU: To Connect. Whether it is connecting employers to job seekers or bringing different cultures together, we at Activ8 value the bridge-builders who make our world a better place every day. Our new series, TSUNAGU, will feature inspirational people who connect Japan and North America through business, education, art, culture, and more. 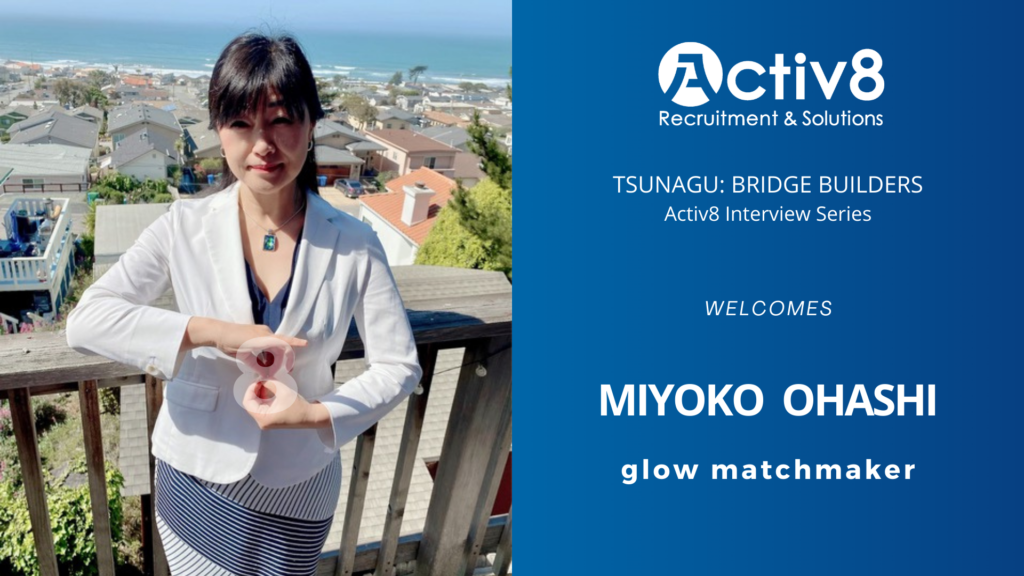 In our next TSUNAGU: Bridge-Builder interview series, we’re featuring Miyoko Ohashi, who runs a matchmaking and dating service in San Francisco. She moved to the United States at the age of 18 and has built her life and business here for more than 20 years. Over those 20 years, she has been meticulous in cultivating relationships and building connections that help her business to thrive.

First in Yokohama and life in America

Miyoko’s first encounter with the United States was in her hometown of Yokohama, Japan’s second-largest city which is adjacent to Tokyo. While growing up, she discovered American culture through the American families who lived on U.S. military bases near her home. At the age of 17, she fell in love with a 19-year-old American man stationed at the base, and the following year, she traveled to America’s West Coast to study abroad, something she had dreamed of doing for many years. This opportunity led her to have a long life in the United States.

“I studied abroad with a promise to my parents of only one year away, but the following year I got married and decided to live permanently in the United States. We were so young,” Miyoko laughed.

Miyoko then worked a desk job at a local travel agency for several years before leaving after sustaining a wrist injury. Around that time, she experienced a divorce and, for the first time, began seriously considering what she wanted for her future. “I wondered what I really wanted to do. After thinking through various options, I was reminded of my love for scuba diving.” She then moved to Australia, where she could do as much scuba diving as possible.

At that time, a Working Holiday Visa in Australia was issued only for adults up to 25 years old. Given this circumstance, Miyoko was only able to stay on a tourist visa for 3 months.

“I had the one-way ticket to Australia, and only $3,000, so I negotiated with scuba boat business owners, asking them to give me a place to stay with meals in exchange for my translation and customer service work for Japanese tourists. That was so reckless of me,” she laughed.

After rejuvenating experiences, like living near the ocean in Australia and working as a hiking guide in Switzerland, Miyoko finally decided to return to the United States at the age of 32. What awaited her was an encounter that would soon change her life.

Upon returning to the U.S., Miyoko saw a recruitment ad by a Japanese matchmaking service agency in an in-flight magazine and was intrigued by the business. She later found that this company was looking for staff for their San Francisco branch. Eventually, she reached out, applied, and was hired.

In addition to her extensive experience in customer service, her positive and sociable personality allowed her to excel. As her new life progressed, Miyoko eventually remarried and gave birth to her child. Sadly, while she was preparing to return to work after her maternity leave, the company went bankrupt.

Out of the disappointment she experienced over the loss of a job she felt true passion for, a new opportunity arose. Her colleague launched a new matchmaking service agency and brought Miyoko into the company. Years later when the president of this agency left this job in 2015, Miyoko took that position.

A love for working with people

According to Miyoko, the most important element of matchmaking is to listen to clients extensively, as there is a significant difference between a real matchmaker’s job and a matchmaking app.

“My role as a matchmaker is to introduce life partner seekers to the right individuals by helping them realize their own characteristics as well as by providing them with each other’s feedback. They tend to choose someone from their subjective perspectives when they use an online service. When they get third-parties’ service like mine, they tend to find the right partners,” said Miyoko.  Customers who found the right partners have told her that they could not have been successful if they looked for partners by themselves. Hearing this feedback from her clients is a constant reminder of how much Miyoko loves her work and how rewarding it is to help create these connections.

The pool of clientele who registered for Miyoko’s service is a diverse group, some members even being registered from Japan. With this in mind, Miyoko is adamant and passionate about providing her customers with detailed and concise feedback, specifically for intercultural couples who may initially experience conflict due to miscommunication or cultural differences.

There are always good people around

Miyoko says that her success is due to the great support system she established with the people around her.

“There have always been good people at the milestones of my life,” Miyoko said. “From the individuals who gave me a job in Australia, to my colleague who invited me to get involved in setting up a company, to my current job. Thanks to those people, I’ve been able to create a life I love from one that started off as seemingly reckless. They helped me believe that everything will work itself out eventually,” she laughed.

In addition to her current business, Miyoko says she wants to launch a casual romance counseling service for young people. “When I gave advice to some teenagers, they told me that it helped them. I wish to create a place where young people could talk about anything, things that they can’t discuss with their parents and friends because they feel embarrassed,” Miyoko said.

Message to those who are seeking a new career

Treating others with kindness as well as taking breaks from work are two important lessons Miyoko has come to live by. “Treasure people. I don’t think I could have done anything without the support of others,” said Miyoko. “And don’t work too hard. Those who focus their entire life on work tend to get lost when they become alone, especially in situations like COVID-19 and natural disasters. Many people who work too hard tend to come and seek our service. Spend time with your friends in outdoor space on weekends and always maintain your work and life balance.”